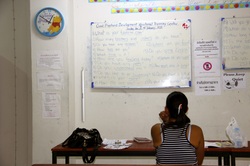 "SHE started teaching English to women we met during our outreach into the bar district in 2010. At first, we had a good friend who let us use his office as a classroom until his lease expired. We had a small group of regulars who learned quickly and enjoyed a break from their normal lives by spending time with people who loved them unconditionally. When the lease expired, we looked around for a room we could use for teaching but they were all far too expensive and the women were unable to travel to the SHE center. So, as crazy as it might sound, we used a table in the food court of the fish market! I can’t begin to tell you what it smelled like but I think you can imagine. Anyway, the school continued at the fish market for some months. Then, we met “the Good Shepherd,” a ministry in Phuket who also taught English in Patong, and we joined forces."
~Mark Biddell

In their partnership with The Good Shepherd, SHE ministries has been able to extend their outreach in bar ministry and their vision of providing a better future for "at risk" men and women through another venue at an English school located right outside of the red-light district in Patong.

Having access to this facility enables teams and interns who participate in the bar ministry outreach to establish one-on-one relationships outside of the red-light district with the men and women they meet in the bars.

The school not only offers discounted English classes, but also offers massage, computer and hairdressing classes, in which the interns can participate in teaching any of the four skills while developing relationships.

Attending and promoting the school on Bangla Road has lead to a variety of new friendships, developed already established friendships and has opened doors in conversations in the bars.

In the past, two interns stumbled across a ladyboy bar off the main street of Bangla Road and talked to the bar owner about the classes. She was so open to the classes that she offered to pay for anyone who worked in her bar to go if they wanted to. Because of her willingness, the interns have been able to share Jesus with two of the women in that bar during the English class and have gained favor with that specific bar.

One student, who attended the class almost one year ago, is now the assistant teacher and translator for the interns that come in! The interns have had countless dates with him and have continuously shared what Jesus is doing in their lives and in his life.

The Good Shepherd Language School has provided such an amazing opportunity to develop a variety of relationships with the people of Patong. The prayer and hope is that these people will be able to hear about who Jesus is and what He is doing in their beautiful city.

“Look among the nations and watch. Be utterly astounded! For I will work a work in your days which you would not believe, though it were told to you…Write the vision and make it plain on tablets, that he may run who reads it. For the vision is yet for an appointed time. But at the end, it will speak and it will not lie. Though it tarries, wait for it; because it will surely come. It will not tarry.”